FULTON, MD – Jan 29, 2019 - Sonatype, the leader in automated open source governance, announced the release of The Total Economic Impact™ Of The Sonatype Nexus Platform, a commissioned study conducted by research firm Forrester Consulting. In the study, Forrester found that organizations using the Nexus Platform received an average of 232% return on their investment over three years and saw a net benefit achieved in under 12 months due to increased developer productivity, decreased risk of breaches and time-saved by security and compliance staff.

The benefits of Sonatype’s Nexus Platform, according to Forrester 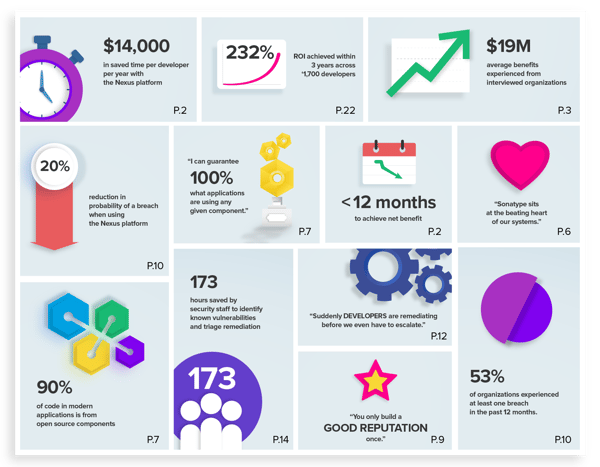 As noted by the report, “in a Forrester Research survey, 12% of respondents indicated they experienced at least one breach over the past year and 41% had experienced multiple breaches.”

Combine that with the fact that 51% of JavaScript packages and 12.1% of Java packages download last year included a known vulnerability, and it’s clear why unchecked open source use has become a business critical concern.

“We’ve long known that what we’ve built at Sonatype not only helps our customers make their software more secure, but it saves developers hundreds of hours of rework, and security and compliance professionals exponential time on manual reviews” said Wayne Jackson, CEO of Sonatype. “Seeing the results of Forrester’s latest study, just makes it even more undeniable.”

Subscribe for all the latest software security news and events